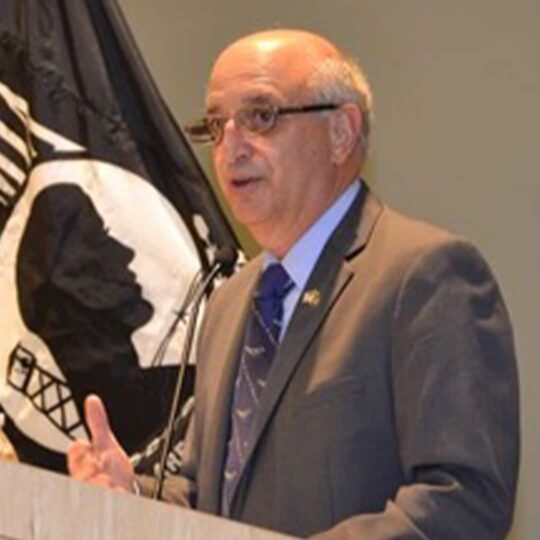 Ralph Galati was born and raised in Philadelphia and Delaware County, PA. He is a graduate of St. James High School (Chester, PA) class of 1966; and he received his Bachelor of Science degree from St. Joseph’s University (Philadelphia, PA) in 1970 and was commissioned a 2nd Lieutenant in the United States Air Force. As a member of the Air Force ROTC, he was a Distinguished Military Graduate, President of the Arnold Air Society, and recipient of the St. Joseph’s University Dean’s Award.

Ralph attended USAF Flight Training in 1970, and received his Wings in 1971. He was a Weapon Systems Officer in the F-4 Phantom aircraft, and was assigned to Ubon Royal Thai Air Force Base in Thailand in the fall of 1971. Ralph qualified as a Laser Guided Bomb lead, and was soon elevated to the role of Forward Air Controller. On February 16, 1972 he and his pilot were shot-down over North Vietnam and were immediately captured and taken to Hanoi. He spent the next 14 months as a Prisoner of War. Ralph was repatriated on March 28, 1973.

Ralph served as an Officer in the USAF for eight years – as a Flight Instructor, Curriculum Developer, and at the Pentagon with the Secretary of the Air Force Office of Legislative Liaison. During this time he earned his Master’s Degree in Public Administration/Human Resource Management from Golden Gate University in San Francisco, CA. Ralph completed his Active Duty in 1978, and continued to serve in the Air Force Reserve until 1981. Ralph’s military awards include:

Ralph was hired by IBM in 1979, and retired in 2007 after 28 years of service. He was a Certified Client Executive and Global Account Manager in the Industrial Sector, developing solutions for large, global enterprises. He was the recipient of numerous Leadership and Sales awards. After his retirement from IBM, Ralph was employed by SAP Americas Headquarters in Newtown Square, PA – and worked in their Education and Training business.

Ralph has also served as a University Adjunct Faculty member and Academic Advisor at Widener University, Cabrini College and St. Joseph’s University from 1982 to 2012. His focus is the Business Value of Information Technology, Organizational Leadership and Managing Dynamic Change.

Ralph served as the Veterans Liaison for Delaware County, PA from 2011-2013. His role included outreach efforts across the county, as well as ensuring that all Delaware County Veterans and their families receive the benefits to which they are entitled.

Ralph is presently the Director of Veterans Services at St. Joseph’s University. His office is responsible for: Developing and implementing Entrepreneurship Programs for Veterans, with a specific focus on disabled Veterans; coordinating campus-wide programs for Veterans and dependents; and Designing Career Development initiatives for Veterans.

Ralph has been married to Rosemary for 45 years. They have two grown children – one with a Master’s Degree in Journalism, and the other is a Medical Doctor. Ralph and Rosemary live in Wallingford, PA. He can be reached at 610.999.4609 and rgalati@jdog.com.